From: The Vermilion Photo Journal, November 6, 2003

Two Fannies was a three-masted bark built in 1862 in Peshtigo, Wisconsin. She was owned in part by her Captain, Alfred Miller. She measured 152 feet on deck and 33 feet in beam and was designed for use as a lumber and iron ore carrier.

On the night of Sunday, August 10, 1890, she was being towed by the tug Crusader bound for Cleveland and the W.R. Hanna Company. She was fully laden with a cargo of iron ore. As is typical with the waters of Lake Erie, the chop became heavier and heavier throughout the night. The crew maintained a strict watch on the vessel and continuously examined her for potential leaks. At 10:30 p.m. a crewmember reported that Two Fannies, unable to withstand the chop, had sprung a leak in her hold. The seaman reported this immediately to Captain Miller. The crew manned the pumps and began drawing water out, but the leak worsened and the water rose rapidly in the hold of the ship. Shortly thereafter, Captain Miller realized that the pumps were not going to do the trick and the vessel was likely to submerge and sink. He ordered the six seaman and the one woman cook into the yawl, or ship's boat. "We were not a second too soon" he was reported to have said, "for before we were fairly out of the schooner's suction she heaved and went down with a rush." The suction the captain was referring to is the great flow of water that accompanies a vessel as it rapidly submerges. If the crew had not been able to row the yawl far enough away from the ship, it too would have pulled under the waters of Lake Erie by the suction. The crew remained afloat in the yawl until the next morning when the steamer City of Detroit and the tug James Amedeus rescued them. All crewmembers were landed safely in Cleveland. There was, fortunately, no loss of life. Today, the Two Fannies lies in sixty feet of water just five miles north of Bay Village, Ohio.

While in tow of tug Crusader, sprung a leak about twenty miles off Cleveland, Ohio, on August 10, 1890, and sank; crew rescued from yawl by steamer City of Detroit the following morning. Vessel was bound from Escanaba, MI, for Cleveland with iron ore at time of loss.

From: The Cleveland Leader and the Cleveland Plain Dealer- August 12, 1890 by: Edward A. Tuttle

About twenty miles out where three spars standing out of the water to make the spot where the schooner Two Fannies had succumbed to the heavy seas, and a few miles off shore, after a perilous night in the vessel's yawl were eight people (and a cat), her captain, cook and crew exhausted from their battle with their struggle toward the lights of Cleveland, and drenched to the skin by the great waves which every few moments swept over the boat and threatened to engulf it.

When the Two Fannies entered Lake Erie from the Detroit River Sunday afternoon in tow of the tug Crusader, she entered a heavy sea, but though an old vessel she was one of the staunchest built boats on the lakes, and no alarm was felt concerning her. Before long, however, it was found that she had sprung a leak and the men were put to work at the pumps. She was kept clear by this means for some time, but as she came down the lake the waves became higher and higher, and washing off the hatches the water began to flow into the hold. Captain Miller, however, had unbounded faith in his vessel, which she had inspired in past years by good behavior in rough weather. Each time the men came aft to report that the water was gaining faster and faster despite their best efforts, he sent them forward with expressions of confidence that all would come out right, and so it might, but just before midnight the tow line parted or was cast off by the Crusader and matters became more complicated.

"The water came in faster and faster then" said Captain Miller, "and although we kept her headed for Cleveland, we made little progress. Finally, the boat refused to obey her rudder, and I knew she was going to the bottom very shortly. I called all hands, and we launched the yawl with some difficulty, Mate Losie getting his foot badly hurt. We got in just in time to get away from the schooner before she made the final plunge, and then set off on our perilous trip for Cleveland twenty miles away. We hardly expected to be able to reach shore in safety, and were further discouraged by the fact that although we sighted several tugs, we were unable to attract their attention."

After rowing hard for several hours, and as they were nearing Cleveland, the disconsolate party was overtaken by the steamer the City of Detroit. What appeared to be a means of safety, however, proved to be their greatest peril, as the yawl narrowly escaped being dashed to pieces against the side of the big steamer. Several oars were broken in the effort to keep the yawl cleared in the exertions of the half exhausted men and were successful. Lines were then thrown out and two of the men drawn up, but it was such a risky process that the others preferred to wait a little longer. The steamer whistled for a tug and as soon as possible the James Amadeus went out, and after some difficulty got the others on board.

"I had no idea that little yawl could have carried eight people fifteen miles through such a sea as was running last night," was the first remark of Mrs. Alice Stowell, Captain Miller's niece, who was aboard the schooner, then seen at her temporary quarters at the Bethel last evening. She is a bright and intelligent woman and cheerfully told her experience.

"Eight people and a cat," she resumed, taking up a little Maltese that was telling its tale of woe in a tone which showed that its lungs had not been affected by its wet voyage. "My little girl gave me this kitten on my last visit to her, and all last evening it followed me closely about, whining so piteously that it imparted to me a presentiment of coming danger and I was not disposed to retire, although I had great confidence in the ability of the schooner to weather the storm, as I have sailed in her for nine seasons in all kinds of weather. When matters reached the worst stage and I was called to get into the boat I lost all hope of reaching the shore alive. I seized an extra dress that was hanging near my purse, I had already put on a life preserver, and I tucked the kitten inside my bosom, and catching hold of the davits, swung into the boat. We barely got away in time to escape being drawn under by the sinking boat. It was pitchy dark, and the lights of Cleveland being like stars in the distance. Time and again I was strangled by the waves, which repeatedly dashed over us, and which required hard work on the part of the men to keep the yawl's head to the heavy seas. A fair indication of our miserable night's ride was the appearance we presented on landing. I was bareheaded and walked up the street enveloped in the mate's coat, and the others were no doubt equally dignified in dress and demeanor, but we thought little of that at the time so glad we were to be safe on land once more."

The Two Fannies was bound for this (Cleveland) port from Escanaba with 800 tons of ore. She was a three-masted schooner, and was built in 1862 at Peshtigo, Wisconsin. Her gross tonnage was a little less than 500, and she was about 150 feet in length with a 33 foot beam. She was owned by her master, Captain Alfred Miller, and others. She had been in dry dock at this port before leaving on what has proved to be her last trip, and besides having her bottom re-caulked had been fitted out with new pumps. The schooner was worth about $15,000.

The Two Fannies left Escanaba with a cargo of iron ore consigned to M.A. Hanna and Company of Cleveland in tow of the tug Crusader along with escorts Cammanche and Hallaran. On Lake Erie, they encountered strong northwest winds. It seems likely that the Two Fannies may have been the last ship in the tow, for the tow line parted and the others passed on. The Cammanche outrode the storm and was seen from Cleveland after daylight, and the item states that the tug Crusader was safe. Nothing was said about the other schooner, the Hallaran.

The cargo of the Two Fannies was insured, but no insurance was carried on the boat itself. Captain Miller was half owner of the vessel, the other owners being Aldrich of Hillsdale and Baldwin of Kenosha. Captain Miller's home was in Kenosha." 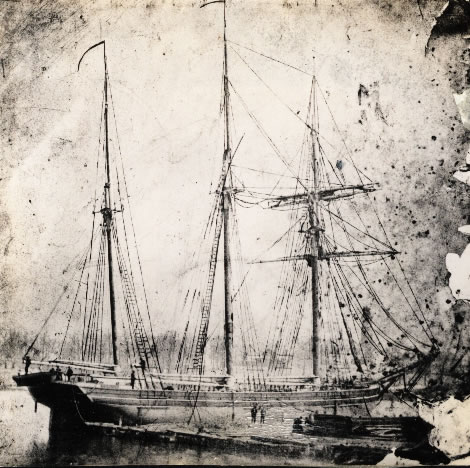