Some experts believe she is lying in deep water buried in a muddy bottom, covered partially or totally with silt. With technology increasing annually, including high-tech instruments like side-scan sonar, digital, high-definition fish/bottom finders, and differential GPS for exact navigation, Lake Erie will eventually give up the location of the Marquette & Bessemer No. 2.

The M&B#2 is often referred to as the "holy grail" of Lake Erie shipwrecks and is considered to be one of the most sought-after shipwrecks in the Great Lakes. Divers from both Canada and the United States have claimed to have found the wreck, subsequently using it as their own private dive site and not revealing the coordinates. None of these claims, however, has been substantiated.

Some residents of Conneaut, Ohio, claim that, if you listen carefully at the lakefront late at night, especially during December, you can still hear the distress whistle from the Marquette & Bessemer No. 2 pierce the cool night air.

The Marquette & Bessemer No. 2 (M&B#2) had been launched only four years prior to her sinking. A strong, powerful ship, the M&B#2's engines were of triple expansion design, with four boilers creating 2280 horsepower. Inside were four rail tracks capable of handling 30+ railcars.

She left Conneaut Harbor mid-morning on December 7, 1909, headed for Port Stanley, Ontario. Accounts of her cargo vary between 30, 32 and 33 railroad cars, mostly loaded with coal, with a few reported to be carrying various types of steel and castings. Upon leaving the safety of Conneaut Harbor, she sailed directly into a fierce storm with winds reported in excess of 70 knots, blizzard conditions, and temperatures falling from 40 degrees to a mere 10 degrees above zero. What happened to the M&B#2 after departing Conneaut remains a mystery. There are conflicting reports from both the Ohio and Ontario sides of Lake Erie, adding to the mystery of her demise. Residents of Conneaut reported hearing the M&B#2's whistle blowing a distress call around 1 AM on the morning of December 8th.

However, people in Port Stanley reported hearing the same distress whistle calls between 3 and 5 AM the morning of December 8th. One account says a customs official saw her off the Port Stanley coast, headed west. Others say the captain's wife, in Conneaut, heard its whistle. Some believe that, due to the poor navigation lights at Port Stanley, McLeod could not see the harbor, so turned back towards Conneaut or another port; leading to the theory she went down while steaming for shelter inside of Long Point (Ontario). Others surmise the heavy seas took their toll, sinking the M&B#2 into some of Lake Erie's deepest depths.

This is quite possible, as she did not have an enclosed stern or a seagate to secure the stern, as rail cars were loaded directly into the stern end of the ship. With the strong southwest winds and high waves, the pumps on the Marquette & Bessemer No. 2 may not have been able to keep up with the water entering from the unprotected stern.

As the winds were from the southwest, some believe she must be lying in Canadian waters. Others believe, however, she may have made an attempt to return to the safety of Conneaut Harbor, or Erie, Pennsylvania.

Regardless, the entire crew of 33 and one passenger were lost to the lake. Most of the crew, including Captain Robert McLeod and his brother, first mate John McLeod, were from Conneaut, Ohio, and the surrounding area. There were other crew members from Port Stanley, Ontario, and Erie and Butler, Pennsylvania, as well.

Again, as with the number of railcars carried, there are discrepancies in how many crew were actually on board that fateful day. Some records say 30, others 36, and yet other reports indicate 33. However, it is known that only one passenger was amongst those who perished: Mr. A.J. Weiss, treasurer of the Keystone Fish Company and Bay State Iron Works.

For weeks after her loss, pieces of wreckage from the M&B#2 washed up on the shores of both the U.S. and Ontario, Canada. As the storm that sank the Marquette & Bessemer No. 2 raged on for a number of days, search vessels could not safely leave harbor. As the winds were stiff and strong from the southwest, however, it was thought that wreckage would be found along the Canadian shore. In the weeks to come, this was found to be partially true, yet wreckage had been found on the water a few miles out from shore between Conneaut, Ohio, and Erie, Pennsylvania, where wreckage had also had begun to wash up. This added even more to the mystery of where the M&B#2 sank: closer to the US side or closer to the Canadian side? However, one more discovery would add yet another kink in finding the answer.

Ralph W. Tillson, a lifelong resident of Erie, Pennsylvania, wrote a letter on 1/14/57 (GLHS, PLESRC archives) reporting a gruesome discovery witnessed a few days after the M&B#2 was lost, the account also being reported in The Erie Daily Times on Saturday, December 11, 1909.

The Erie, Pennsylvania, harbormaster, Jerry Driscoll, in his harbor tug of the same name, along with a Pennsylvania fishing tug, the Commodore Perry, were patrolling the waters offshore of Erie in search of wreckage and the slim chance that survivors might be found. In previous days, wreckage from the M&B#2 had been found by other search vessels, but no survivors. The search by the Perry and Driscoll was not in vain.

During their patrol, an object was spotted on the horizon approximately 15 miles offshore of Erie. Upon approach, a gruesome discovery was made. A lifeboat was found; specifically, lifeboat No.4 from the M&B#2. The lifeboat, floating half full of water, contained nine frozen crew members from the M&B#2 along with the ice-encrusted clothing of a 10th. All were dressed in work clothing, with none wearing any heavy protective clothing, blankets or coats. Seven of the nine men were residents on Conneaut, which resulted in tremendous grief and morning throughout the community. All that one can assume from this is that whatever happened to the Marquette & Bessemer No. 2 happened very quickly.

Other bodies continued to wash up onshore for the next few months at Long Point (Ontario, Canada), Buffalo, N.Y., and the Niagara River close to the falls. On October 7, 1910, almost a year from the date of the loss, the body of Captain Robert McLeod was found along the Canadian shoreline. Identified by his brother Hugh, the identity was confirmed by a tattoo bearing "McLeod" on one arm.

Captain McLeod had complained to the ship's owners in the past month regarding the need for a stern gate. He claimed that even when heading into a heavy sea, the stern would still sink into each wave trough, each time causing huge quantities of water to pour into the ship. The owners promised him a stern gate; unfortunately, it had yet to be installed.

Mr. A.J. Weiss made it aboard the ill-fated vessel at the last minute. The treasurer for the Keystone Fish Company in Erie, Pennsylvania, Mr. Weiss was en-route to Port Stanley in order to purchase the Port Stanley Fish Company for the owners of Keystone Fish. Reports indicate he was carrying $50,000 in a leather briefcase for this purpose.

Other reports indicate the ship's safe also contained coinage that, at today's value, would be worth $25,000-$50,000. These two stories not only add to the mystery of where she rests today, but also injects the excitement of finding a "treasure" ship. Does this really make the shipwreck "valuable" for whomever discovers her grave? Not necessarily. Yet finding the wreck itself would be a treasure to maritime history, as maybe only then the reason for how she sank would be revealed. To date, none of these "rumors" have come to fruition. Currently, the Marquette & Bessemer No. 2 is one of the most sought-after shipwrecks in the Great Lakes.

Now for some confusion of photographs of what some believe are of the M&B#2. The photos do exist, but there is actually an Marquette & Bessemer No. 2, the first, and an Marquette & Bessemer No. 2, the second! Apparently the owners of the M&B#2 were pleased with the ship, for after it sank in 1909, they immediately set about building another car ferry, virtually identical to the first M&B#2, and gave it the same name. No doubt this created controversy in Conneaut and Port Stanley amongst the relatives and loved ones of those crew members who had just recently been lost.

This "sister" ship to the first M&B#2 was built by American Shipbuilders, Cleveland, Ohio, in 1910 as a replacement, with her official assigned number being 208021. Virtually the exact same size, it was difficult to distinguish between photographs of the two.

The second M&B#2 ship served the owners well from 1910-1944. In fact, during the Great Lakes Exposition in Cleveland, Ohio, in 1936, she was chartered to Herman Pirchner and used as showboat at East Ninth Street, unofficially being renamed the Moses Cleveland.

Otherwise, she was operated as a car ferry from 1910-1940, between Conneaut, Ohio, and Ports Dover and Stanley, Ontario, changing owners four times during her lifetime. Her name was changed to Lillian in 1946 by new owners, and she was eventually scrapped in 1997 in Menominee, Michigan.

12. True Stories of Ships and The Men That Sailed Them, James Donahue http://perdurabo10.tripod.com/ships/id173.html 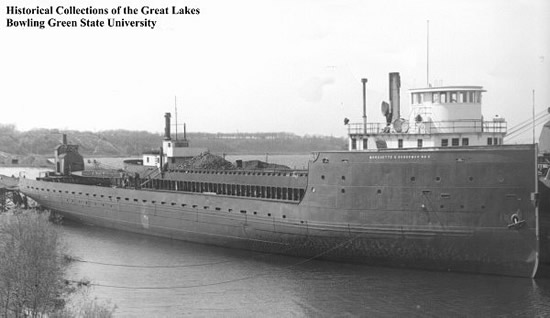 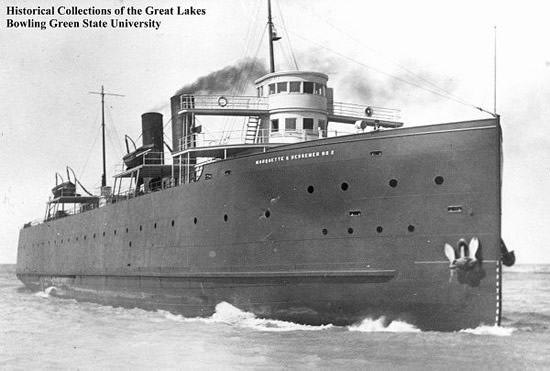 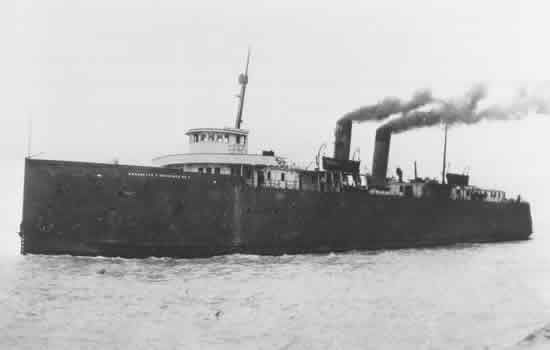 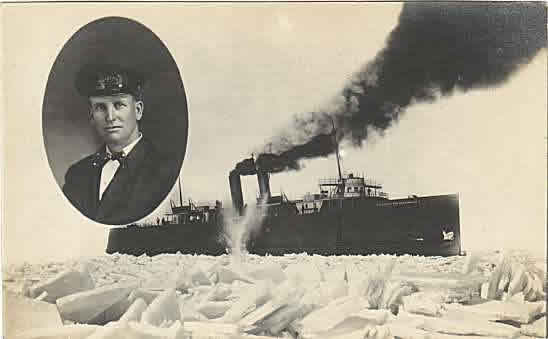 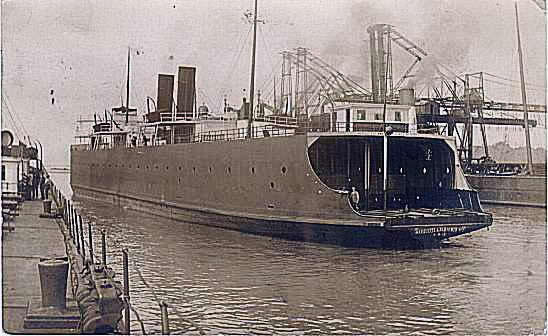